Sports for Development: one step at a time with PACES 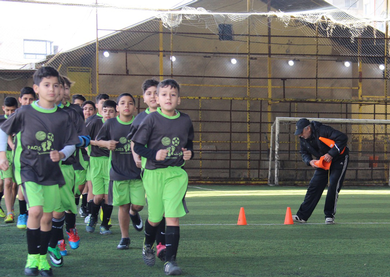 Sport is an integral and useful part of children’s lives and development, and even more so in underprivileged locations. It connects people across borders and motivates them to act fairly and perform to the best of their ability, regardless of the discipline. It is an area where Deutsche Bank’s engagement is strong.

In the Middle East, Deutsche Bank Middle East Foundation has collaborated with many sports-focused non-governmental organisations (NGOs) to promote children’s physical, emotional and social development, and one that we have consistently supported is the Palestine Association for Children’s Encouragement of Sports, better known as PACES.

PACES is a UK-based charity established in 2006 with the aim of providing healthy, structured after-school sports programmes for Palestinian girls and boys aged 7-16 year living in refugee camps in some of the most marginalised and vulnerable areas in Palestine, Jordan and Lebanon.

The Deutsche Bank Middle East Foundation has been a proud sponsor and supporter of PACES since 2013, working on projects across these three locations to provide children with access to safe playgrounds and enhance their well-being and social skills. The projects have also helped coaches to serve their communities better via sport. Since 2013, Deutsche Bank’s grants have benefited 5,492 children, 204 coaches and 74 assistant coaches. 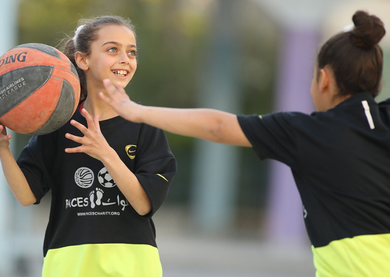 According to international and local child welfare reports, promoting organised and supervised activities reduces the likelihood of children experiencing the risks, threats and fears that exist in communities where the unstable political situation breeds constant insecurity. PACES is committed to promoting the health, safety, education and empowerment of children; through its programme. PACES tackles issues like gender equality and empowering women, and makes serious efforts to change the social norms so girls can derive as much benefit from the offer as boys.

In addition to the core sports programme, girls enrolled in PACES are empowered by the community engagement, capacity building, and social justice elements of its programme. They learn key life skills that enable them to interact independently and confidently without fear or hesitation. PACES girls are nurtured to tell their own stories, share their experiences and lessons learned and help empower other girls and young women in their communities.

Paving the way for her passion for basketball 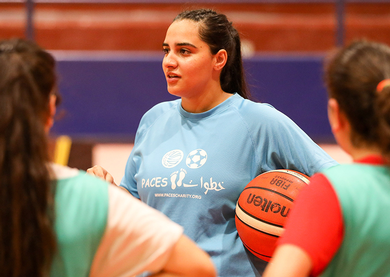 The PACES programme, which is now operating across 13 Palestinian cities, was first established in Beit Sahour, Bethlehem in 2008. Verona Khair was one of the very first children to join the basketball programme aged 9.

Like other girls in her community, she had very few opportunities to play sports and her limited options were rarely available or affordable. For 5 years, Verona played for PACES, and in recognition of her talent, she was selected to represent PACES in the ‘United World Games’ basketball tournament in Austria in 2012.

Verona continued to play for PACES until she graduated from the programme aged 16. However, her love for the sport and determination enabled her to continue playing for her the local club.

Two years later, Verona graduated from high school. Heavily influenced by the PACES programme that shaped her childhood, she was determined to continue her career in physical education. Her parents, who never attended university themselves, supported her decision, having seen the programme’s social and developmental impact on their daughter. “My parents saw how happy and confident I became once I started playing basketball. I am thankful for their support.”

To further enrich her university experience, Verona was invited to rejoin the programme as an assistant coach for a girls’ basketball group in Beit Sahour during her second year. Besides coaching 14-year-old girls, Verona regularly attended PACES programmes to enhance coaches’ technical and life skills. The star basketball player became a star student, completing her Bachelor’s degree in just 3 years, despite all the challenges she faced. Verona also worked on obtaining her official registration as a referee with the Palestinian Basketball Federation

The road to entrepreneurship

Straight after completing her degree, the 21-year-old was offered a full time job as a physical education teacher at one of the local private schools. But her dreams are bigger than that: in a few years’ time she wants to open her own sports academy to create a positive impact in her local community and enable others to become what they were born to be.
“Every day I witness how sports can change the way people think, especially in small communities. It definitely changed my life and motivated me to succeed. I am very proud of my accomplishments so far.”

We want to empower startups, non-profits and commercial businesses that create wider social good. Our Made for Good programme provides access to advice, support and networks to help them scale up.

Wherever we do business we work to build stronger and more inclusive communities. We focus our efforts on the most disadvantaged through projects that deliver basic welfare, improve essential infrastructure and provide relief in emergencies.

Our employees increase the impact of our CSR programmes. They share their skills and their time by volunteering as mentors, advisers and advocates.