Deutsche Bank is at the forefront of corporate social media communications activities among the world’s 20 largest banks and wealth managers, a study by MyPrivateBanking Research found. 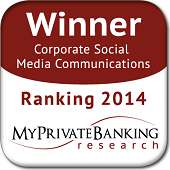 For the report – entitled “Social Media for Banking and Wealth Management 2014: The Gap is Widening” – the Swiss research company’s technology and industry experts conducted a detailed analysis of the strengths and weaknesses of the social media presences of the surveyed institutes. Deutsche Bank received the highest overall score in the category Corporate Social Media Communications.

MyPrivateBanking Research is an independent firm specialising in research and analysis on how financial services firms should develop their websites, social media presence and mobile apps.